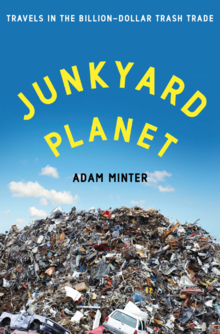 Adam, thank you for agreeing to a Q&A with the Chicago Recycling Coalition. I have visited multiple recycling/sorting facilities

in Chicago over the years, and I am a huge fan of your book, Junkyard Planet (to the extent I read it twice!).

I understand a paperback edition is about to be released, which is great, as you deftly explain very critical and poorly understood

links of our waste supply-and-demand chain.  I always try to emphasize to people that getting materials into the right recycling bin

is only one part of the equation. The economics that drive whether those sorted materials get into the hands of manufacturers who

are going to use them is equally as important.

So let’s get to some insights and practical advice that will be of interest to Chicago’s recycling community.


1. What is the most surprising thing that can be successfully recycled in metropolitan regions like Chicago?

I guess it depends on how you look at it! Personally, I never cease to be amazed that you can drop off a car at a scrap yard and within a week or two much of it—mostly the metals—will be well on its way to being transformed into a new car.  That process tends to be overlooked these days in favor of folks worrying about recycling their phones, pizza boxes, and other household items. Those are important items to recycle, to be sure. But cars dwarf all of those waste streams by several magnitudes, and the fact that we've figured out how to recycle them so effectively is one of the great environmental success stories in modern US history.


2. What is the flip side of that; which things do people assume can be recycled, but are ultimately going to end up in a landfill?

Your iPhone. Sure, Apple will tell you that they’ll take it back for “responsible recycling.” And they will— but then they don’t tell you what, precisely, that involves. Phones, like most electronics, are difficult to separate into their components so they can be recycled. Just try, for example, segregating all of the plastic from the metal in your iPhone–can’t be done. So iPhones that can’t be repaired, upgraded, and sold for re-use are shredded. Then a combination of magnets and other technologies are used to pull out metals. But the rest of that phone—especially the glass and plastic—is landfill and incinerator bound. Nobody makes stuff from iPhone glass, and even if they did, it’d be too expensive and difficult to pull it out of the mess of plastic and metals bits left after the shredder. Different people give different estimates on just how much of an iPhone is recyclable. But conservatively we can say that it’s below fifty percent. That’s why I always tell folks: when a company offers to recycle something for you, make a point of asking how much of it they actually recycle, and how.

3. A very Chicago question: cardboard pizza boxes.  The consensus seems to be that you can rip the top off and recycle it, but greasy stains are a big problem for the recycling process - is a single grease spot a dealbreaker?

I went to college in Chicago, so I well appreciate the importance of this question. Here’s the deal: it’s complicated. Paper mills don’t want grease and bits of cheese in their production process because it raises their costs and—if there's enough in the production—it lowers the quality of the paper. So, in quality conscious North America, Europe, Japan, Australia, and other developed world regions, pizza boxes are a no-no. But can you make paper from a bunch of dirty pizza boxes? Yes, you can. The only problem is that the quality won't be as high. In Asia and other developing regions, that’s not a big deal, and I’ve seen pizza boxes fed into paper recycling lines in China, Malaysia, and India, to name those that come to mind right now. Is quality worth sacrificing for higher recycling rates? That’s a question that folks in rich, developed countries like the US haven't had to ask themselves yet.


4. Another Chicago one: glass or cans?  There is a growing movement towards cans in the craft beer industry as the canning technology has improved as far as flavor and freshness, and they cost less to ship.

If the bottles are re-usables, then I say glass. Re-use is always better than recycling. But I realize that’s not a common option in Chicago, or anywhere else in the US. As a result, a lot of glass is sent to recycling plants in the US... and then sent to landfills. Why? Because glass is cheap to make, and there’s just not much of a market for the mixed colored glass that comes out of most recycling plants. In terms of the energy expenditures associated with glass versus aluminum—I'm just not sure. I'd love to see that data, though.


5. What's coming down the pike people should be aware of?

I think we’re on the verge of seeing some real innovation in the plastics recycling sector, such that recyclers will not only be able to mechanically sort different types of plastics, but also use them (for chemistry reasons, recycled plastics are almost always down-cycled). I’m hopeful.

6. We always preach “reduce, reuse, recycle” in that order for a reason—how would you suggest we address the importance of closing the supply-demand cycle by purchasing goods with recycled content?

As I say in my book, recycling is only marginally better than tossing stuff in the landfill. After all, recycling paper and aluminum, to name just two items, still requires vast amounts of energy and water. Likewise, nothing is 100% recyclable. Most plastics can only go through the process once or twice; paper five or six times. As for metals, they can be recycled endlessly, but there’s always some lost in the process. So nobody—especially an environmentalist—should feel as if they’ve somehow done the environment a big favor by tossing something into a blue bin. If you really want to do the Earth a favor, reduce your consumption.

That’s a hard ask, of course. I don’t want to do it, either. So what’s the solution? I’m not sure there is one. However, I’ve become a bit proponent of repair—a fourth ‘R’ that fits nicely into the space between ‘Reuse’ and ‘Recycle’ in the good old three Rs. As tech companies know very well, a repairable gadget tends to be better built and longer lasting. And that’s what we really need if we’re going to continue being a consumption-driven society—longer-lasting goods. France is working on laws that will require companies to tell consumers how long parts will be available for the stuff they buy—I think that’s a fine idea, and a really good way to start lengthening product lifespan. I’d love to see the US go in that direction, too.